A new way of working with us! Low monthly fixed cost. Access our team on demand to help you scale. More info
Home / Our work / Our work michelle bridges 12wbt build

The site has a few interesting technical challenges:

We used Agile methods such as stories and sprints to help with the initial build, and then tools like New Relic and Jenkins to deliver a fast and reliable site.

How we approached this

This was an unusual project in two ways. First of all, there was already an existing site. This meant everyone was on the same page in terms of how things needed to work, and what wasn’t working and needed to be different.

Second was the time frame- the 12WBT program runs several times each year, and so by taking this on we needed to commit to delivering a fully tested and working site before the next round kicked off. We didn’t really have an opportunity for a soft launch or gradual release- everything had to work.

We approached this in an Agile fashion and broke the project up into a series of 1-2 week sprints:

Each sprint consisted of:

We needed to hit a specific time for release, so there was constant negotiation around what would be in the final release vs post launch. We used Jira and Greenhopper to prioritise each item and keep track of these as feature stories and requests.

On a typical project wed start with a series of wireframes, mapping out different areas and functionality. Wed then embellish these wireframes with Stories - so for each key area we have a visual diagram plus a set of stories which describe it. On 12WBT we already had a working site, so we skipped wireframes and relied only on Stories- not as pretty to look at, but they did the job. So the existing site described how a feature should look, and the Story described how it should work.

For each feature on the site, we wrote a Story for how it should work. In Rails, Stories are especially significant - they improve communication across the team and speed up the development process.

If today is weigh in day, this is what you should see on your dashboard: 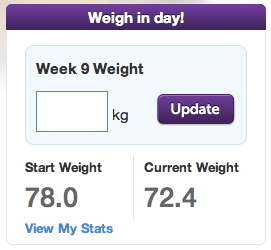 Here is the story:

As a member who has not weighed in this week when today is Weigh In Day for week X then I should see “weigh in day!” form so I can update my weight

This Story is pretty simple, but it covers a lot. First, it describes the basic thing this feature needs to do: get people to enter in their weight on the right day. If you were to write a traditional long form IT spec doc, you might struggle to communicate that as clearly. That is one of the advantages of Stories- you avoid a situation where your developer has made what has been asked for, but not what you wanted.

This Story simply describes what the user should see when and why (so I can update my weight). It isnt stated, but the Story also infers that you should only see the form on weigh in day, which is correct - you shouldn’t see the form on other days. A separate step could check that.

This story uses a syntax called Cucumber, and the powerful bit comes when we can take this plain English Story and feed it in to our Rails application as a test - one of hundreds we might have. This is where things get all super awesome- that Story is used to fire off processes that will automatically check it with that type of member, on that day, and test to see if the member can update their weight.

What do Stories have to do with tests?

Back in the stone age of web development, developers would write code, and then someone would then need to test that it works. Something might break, a tester would report it, and the developer would then fix it. That process kind of works as long as the code remains simple. Increase complexity and you’ll either need more testers or a longer time between releases.

More modern ways of working with code (known as frameworks like Ruby on Rails) use tests as an intrinsic part of making stuff. Instead of testing if something works, you create a process that tests it. How many of the features you test is referred to as coverage. If that process fails, then you know the feature isnt working.

The 12WBT project is quite complex, with a heap of moving parts. A human would take weeks to test each of the different aspects of the site (can I still log in?, will it accept my credit card? can I make start a new topic in the forum?, etc). Since were often deploying a new version to the live site several times a day, this approach wouldn’t really cut it.

Because this is a paid site, members would be understandably upset if we did push up a change which meant they couldn’t sign in or do stuff. Yes, we could roll back to an earlier version, but we might not pick it up in time.

Remember all those hundreds of Cucumber tests? Well, each and every time a developer adds new code, our Jenkins CI server fires up, checks out a version of the code and creates a fake 12WBT site. This then gets filled with content, and all of the tests get run. If a test fails, the developer gets a nasty email and all the team knows. At that point that developer goes very quiet and scrambles to fix the build.

Some features can get described in a story, while other things wed like to test require someone to click around with a browser (eg: when I click on that does that open and do I see X? When I put a pay by credit card do I get an email a few minutes later?). To test this we use Selenium, which runs a browser session over the site to check that everything is where it should be.

Since he is quite particular, Jenkins also runs a quality check on our code using a tool called MetricFu. This looks for smelly code (a.k.a. shitty code) - repetitious or unnecessarily complex bits that indicate poor quality. Again, this is automated so is running continually in the background - no humans required.

Using a CMS vs a Framework

One of the unusual things about this project was that a separate team had already built the site. This had used a PHP based CMS to manage all of the content as pages, while we took a different approach and relied completely on the Ruby on Rails framework.

To explain why, here is how the business process for the 12WBT site works:

Taking a CMS approach has some definite advantages - for example you’ve already got a way of authors to edit content, and you can schedule pages for when they should appear - you don’t need to develop anything. We often take a CMS approach for sites that have a lot of static pages or a mix of CMS and framework.

However a CMS also introduces limitations. For example everything becomes quite page centric - all the data is tied to which page it is on. Which is fine if your site is a blog or a series of content pages. But lets say in your site you have a bunch of recipes. Each recipe has pictures, some instructions, ingredients and how long it will take to cook, and each recipe lives on its own page. You might want to show your recipes in a list, but then you might also show them in ways that make things easier for your user - like:

…then having recipes as pages in a CMS becomes hard. Since all the information for each recipe is inside a CMS page in a particular section, the code has to hunt around and do quite a bit of work to grab that list of chick pea recipes or generate a dynamic shopping list. The code has to deal with all the artefacts or “code dags” that need to be there for the CMS, rather than grabbing the information directly from the database.

Things get interesting when you have several 12WBT rounds running at the same time. Some content is common and shared between all rounds, while other content is unique. Members leave comments and reviews, and these are only seen by other members in that round. Different parts of the forum need to unlock on different days.

By using a framework approach, we were able to create tools to easily load content like recipes, and then do interesting things with them - like show vegetarian users only the vegetarian recipes, or dynamically generate a shopping list of ingredients for a particular week.

One of the things that we identified as a priority was to look after members- to make sure they had an awesome experience and to respond quickly if something did go wrong. Once a member is paying for an online service their expectations of service increases and we need to meet their expectations.

Online companies like Zappos have grown massively not because they sell cheap shoes, but because they excel at customer service. To try to deliver awesome member service we used:

Another area that we thought was important to address was speed. This site gets quite busy, so keeping page load times as quick as possible was critical. First of all we needed to do extensive load testing to simulate high load scenarios- and there were two we were worried about:

There are lots of load testing sites and software out there, but some can give misleading results. We needed to find a load testing solution that could

We used Browsermob to simulate this load, using dynamic Selenium scripts to describe different paths through the site. Thousands of users created accounts, paid with test credit cards, logged in and used the site - just like normal users do.

Part of our redesign involved carefully looking at how to best cache each page, to ensure great performance. Some pages can be completely page cached, which means the page you’re seeing has been pre-generated. Other pages contain dynamic elements which are regularly being updated- say a forum page. For these we used fragment caching, which is part of Rails.

We also moved the hosting from a US cloud service to a local AU physical machine. The config changed from Apache to use the mighty Nginx web server, with Thins for the application. Although cloud seems to be the rage at the moment, people often overlook the limitations of a virtual environment. A cloud seems to be great if you have a small site that youd like the ability to shut down if required, or if you need thousands of servers to distribute tasks to. If you’re in the middle, then I’m not sure if cloud is always a good approach.

Using a bare metal server that is physically close to most of your audience makes sense if you need speed- it certainly means a far snappier response rate. This James Gollick presentation has some interesting bits on this (he calculated the impact of server speed to his site revenue). Here is our Google speed report on average server response comparing the old site to the new one (hosting was US Cloud now AU bare metal running Ruby on Rails).

The initial build of the Michelle Bridges 12WBT project